Q: How can a warrant be issued for a crime if law enforcement does not make contact with you to question you of crime?

Example: My sister was on vacation. She was not home when police came to speak with her Son who was believed to have sent a friend an image of buttocks. She finds out over 4 months later her 13yr old child has a no bond warrant. This was the first anyone had heard of the image, the attempted police contact, or that her Son was under suspicion. How can this be legal? Shouldnt they leave a card or send some notice? If we are not legally required in Colorado to speak to police or open the door, how can warrants be issued for not doing so? 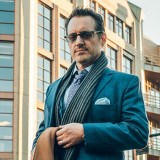 A: You’ve asked a number of different quests over a few different posts. i will try to compound everything in to one answer to you don’t have to go to multiple places to get an answers.

Warrants are based on a very low legal standard called “probable cause.” There is no requirement that a police officer speak to an accused before getting a warrant. And if the accused was my client, i would say not to speak to the police anyway. So, really all that is needed is someone stating that he/she has been the victim of a crime. If there is any form of corroborating evidence, like another kid who was sent a buttock picture from your friend’s son, that would likely be enough. The interview stage is a great opportunity for the police to get the kid to confess, making their job that much easier. There’s much less to prove when you have a confession.

Now, getting in to the substance of the case, you raise an interesting point about privacy. If the image was shared around originally, then there might not be a privacy issue at play. But, this will be very factually specific. People can give consent to certain amounts of privacy and not others. Which means, for example, you can use the photo for your own personal reasons, but you can’t share it with your friends. And who knows what people are saying or what exactly the police are investigating. No one will know until the reports are reviewed.

Then there begs the obvious question, if this picture had images of someone under the age of 18, then that is possession and distribution of child pornography, which is a whole event animal.